Electronic circuits and components are being designed to handle greater amounts of power in smaller packages. The amount of power used or transmitted per unit mass, area or volume is often referred to as the “power density.” 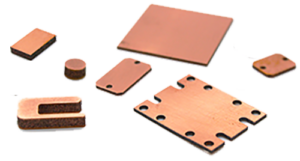 This heat dissipation challenge is becoming more commonplace in several industries, including aerospace and defense, transportation, power generation and transmission, RF systems and data centers. Here are a few examples:

Wide-bandgap (WBG) semiconductor materials (including GaN-on-SiC) offer features and capabilities that are orders of magnitude greater than their silicon counterparts, including 10 times voltage blocking capability, 10 times to 100 times switching speed capability and one-tenth the energy losses, while being intrinsically radiation-hardened. This technology could provide power systems with power densities up to 10 times higher than current silicon-based devices.

GaN has become the technology of choice for power-hungry applications, such as power RF, where the RF system is required to transmit signals over long distances and/or at high-end power levels. These applications include radar, base transceiver stations (BTS), satellite communications and electronic warfare (EW).  Advantages of GaN include a high breakdown field, which allows the GaN device to operate at much higher voltages than other semiconductor devices, high saturation velocity, which enables GaN devices to deliver much higher current density, and outstanding thermal properties, which enable these devices to operate at lower temperatures.

Higher power density devices are used in several other applications in manufacturing and the computer industry. For example, lasers that are used in a variety of manufacturing operations use high power laser diode sub-mounts that come in increasingly smaller form factors. In high-performance computing and computer data centers, large power-hungry dies may be utilized that generate hundreds of watts per cubic centimeter.

If these types of thermal management scenarios are something you’re currently experiencing, complete the form above and download our whitepaper: Hermetic Solutions DiaCool™ Materials Offer Superior Thermal Management for the Next Generation of Higher Power Density Electronics. You will learn why current or legacy systems may no longer be adequate for the higher heat loads developed by modern high power density systems and components. The article will also discuss more advanced heat dissipation materials and techniques, and how the newly developed Hermetic Solutions DiaCool materials can address this emerging market need.

Whether you are interested in discussing a specific requirement or you have general technical and/or industry questions, we look forward to speaking with you.
Contact Us Now
;